In a move that was expected, DC United midfielder and fan favorite Ben Olsen has officially retired as a player. In his career with the Black and Red, Olsen has won two MLS Cups, was the 1999 MLS Cup MVP, two time all star and a member of the 2007 Best XI. There is no doubting that Olsen is a great player and has the potential to be a good coach in the MLS, but there are things that Olsen did off the field that cannot be ignored, and one of them was for Santino Quaranta.

As many people know, Quaranta struggled with severe drug addiction and recently got clean. It was Ben Olsen who provided a hand to Quaranta enabling the young man to come back into form this year. Here is a quote from Quaranta on the matter:

"When I called him when things were bad for me, he helped me so much as a person. It's not about the soccer; everybody knows what he does on the soccer field and everyone respects that. For me, it's the bigger picture of who he is as a person. He gave me hope. He was the person who said I could come back from all of it, and afterward, I believed I could."

While I always liked the way Olsen played, both for DC United and for the U.S. National team, he will be the first to admit that early on he was all energy and little focus. But between 1999 and 2004, he really matured as a player and became the kind of player that fans love, teammates love and opposing players respect.

But one thing that I think might be missing in the coming years off the field, is Olsen's sense of humor and willingness to have some fun promoting the league. I loved these videos that were done in the lead up to teh 2008 MLS Cup.

While Olsen was good, I thought Chris Klein did a good job as well looking like he was going to burst.

I love Ben's talk with the red headed boy in this video:

"It's more of a craving, an endless longing that haunts me in the darkness of night."

Great stuff. Oh and who can forget this photo of Ben and his teammates for the Body Issue of ESPN the Magazine. 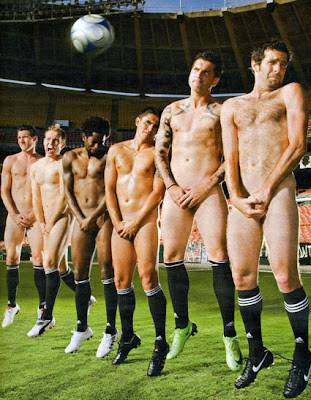 I hope we see Ben Olsen on the sidelines as an assistant next year.
Posted by Unknown at 1:01 PM

What I'm Listening To in the Car